​All Steamed Up
Streetlight Magazine
by gayla m. mills 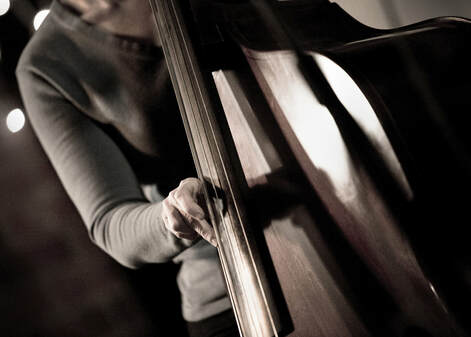 photo by Gary Alter
I never imagined that one day I’d be straddling a toilet while playing upright bass in a steamy bathroom with a naked man taking a shower on the other side of a sheer plastic curtain. But that’s exactly what I did yesterday.

It started a few weeks ago when I noticed a buzz when playing a B flat. You might think this wouldn’t be all that noticeable. It is B flat, after all. But we actually play a lot out of that key. It’s a good one for Gene’s voice.

We spent some time messing around with one set of ears on different parts of the bass while the other plucked the string. We took turns. But neither of us could identify the buzzing.

So I took the bass in to Don, a guy who makes fiddles and has worked on my instrument in the past. He begins immediately to criticize John, the other guy who works on my bass.

“This post isn’t set in the right place. You say John glued the top down? And put in a new bar? I bet that’s the problem.”

I’m used to this.

“John said that the Chinese didn’t use the right kind of glue when they built the thing,” I reply.

“That’s right. Actually, you just don’t know with these plywood tops. It might not be worth putting any more into this one. Have you thought about getting a new one?”
​
A whole new instrument just because of one buzz? The idea of flushing a thousand dollars or more down the toilet isn’t working for me. Besides, I really like the way this one sounds. She’s got great tone and plays well.

“Why don’t you just do what you can to it?” I suggest.

Two days later, with a new bridge, shaved fingerboard, and relocated post, my bass still buzzes. In fact, it seems a bit worse. I pay up. What else can I do?

“Thanks, Don, I’ll play this tonight and see if it settles in.”

That evening I call John and explain the situation. He’s quick to respond.

“Sounds like that diagnostic was real amateurish,” he says. “It can’t possibly be the bar. I think I need to take a look.”

I know what that means. More money. So I stall for time, asking questions. Finally he throws me a bone.

“There’s something you can do that might solve all your troubles. It could just be the glue has shifted with the change in humidity.”

He suggests I take the bass into a steamy bathroom to loosen up the glue, which might shift and fill in the gaps causing the buzz. I’m skeptical, but he’s a professional, right? Maybe he knows tricks of the instrument trade that mere mortals like me can’t understand.

So the next morning I inform Gene that he needs to shower.

Dutifully he complies. Meanwhile, I hoist my old girl up the stairs. This house was built in 1947. Two people can barely squeeze into the bathroom, and that’s only if they’re pretty thin and get intimate. But I’m able to lift the instrument up and over the toilet and maneuver it in front of the sink. Holding it up with one hand, I ease myself into the room, straddle the toilet, and somehow close the door. Gene is beginning the shampoo phase of his shower.

“Be thorough,” I say. “The steam is just starting to fog up the mirror.”

To distract myself, I start playing the walking bass line to Cash on the Barrelhead. If you think singing in the shower sounds good, you should trying playing bass in a small bathroom. The reverb is phenomenal.

“I’m done with the conditioner,” my better half says. “Should I go a little longer?”

“That’s okay, I think this is enough,” I replied. “But I don’t know how you’re going to get out of here.”

That evening, when I figure the glue has had enough time to set up, I try playing a few notes. Now all the strings buzz, every one.
​
There’s one consolation, though. At least Gene is really clean now.