​Music Under a Tennessee Moon
Sasee
by gayla m. mills 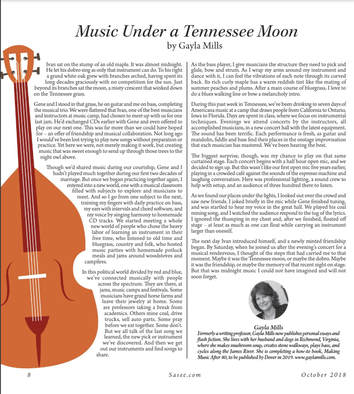 Ivan sat on the stump of an old maple. It was almost midnight. He let his dobro sing as only that instrument can do. To his right a grand white oak grew with branches arched, having spent its long decades graciously with no competition for the sun. Just beyond its branches sat the moon, a misty crescent that winked down on the Tennessee grass.

Gene and I stood in that grass, he on guitar and me on bass, completing the musical trio. We were flattered that Ivan, one of the best musicians and instructors at music camp, had chosen to meet up with us for one last jam. He’d exchanged CDs earlier with Gene, and even offered to play on our next one. This was far more than we could have hoped for—an offer of friendship and musical collaboration. Not long ago I would’ve been lost trying to play new songs without preparation or practice. Yet here we were, not merely making it work, but creating music that was sweet enough to send up through those trees to the night owl above.

Though we’d shared music during our courtship, Gene and I hadn’t played much together during our first two decades of marriage. But once we began practicing together again, I entered into a new world, one with a musical classroom filled with subjects to explore and musicians to meet. And so I go from one subject to the next, training my fingers with daily practice on bass, my ears with intervals and chord software, and my voice by singing harmony to homemade CD tracks. We started meeting a whole new world of people who chose the heavy labor of learning an instrument in their free time, who listened to old time and bluegrass, country and folk, who hosted music parties with homemade potluck meals and jams around woodstoves and campfires.

In this political world divided by red and blue, we’ve connected musically with people across the spectrum. They are there, at jams, music camps, and festivals. Some musicians have grand horse farms and leave their jewelry at home. Some are professors taking a break from academics. Others mine coal, drive trucks, sell auto parts. Some pray before we eat together. Some don’t. But we all talk of the last song we learned, the new pick or instrument we’ve discovered. And then we get out our instruments and find songs to share.

As the bass player, I give musicians the structure they need to pick and glide, bow and strum. As I wrap my arms around my instrument and dance with it, I can feel the vibrations of each note through its curved back. Its rich curly maple has a warm reddish tint like the mating of summer peaches and plums. After a main course of bluegrass, I love to do a blues walking line or bow a melancholy intro.

During this past week in Tennessee, we’ve been drinking in seven days of Americana music at a camp that draws people from California to Ontario, Iowa to Florida. Days are spent in class, where we focus on instrumental techniques. Evenings we attend concerts by the instructors, all accomplished musicians, in a new concert hall with the latest equipment. The sound has been terrific. Each performance is fresh, as guitar and mandolin, fiddle and bass find their places in the onstage improvisation that each musician has mastered. We’ve been hearing the best.

The biggest surprise, though, was my chance to play on that same curtained stage. Each concert begins with a half hour open mic, and we decided to sign up. But this wasn’t like our first open mic five years earlier, playing in a crowded café against the sounds of the espresso machine and laughing conversation. Here was professional lighting, a sound crew to help with setup, and an audience of three hundred who was there to listen.

As we found our places under the lights, I looked out over the crowd and saw new friends. I joked briefly in the mic while Gene finished tuning, and was startled to hear my voice in the great hall. We played his coal mining song, and I watched the audience respond to the tug of the lyrics. I ignored the thumping in my chest and, after we finished, floated off stage—at least as much as one can float while carrying an instrument larger than oneself.

The next day Ivan introduced himself, and a newly minted friendship began. By Saturday, when he joined us after the evening’s concert for a musical rendezvous, I thought of the steps that had carried me to that moment. Maybe it was the Tennessee moon, or maybe the dobro. Maybe it was the friendship, or maybe the memory of that recent night on stage. But that was midnight music I could not have imagined and will not soon forget.