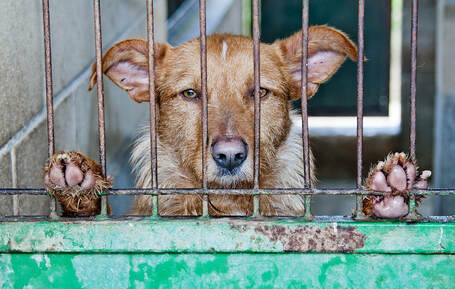 Last Sunday I returned to work to pick up a forgotten file. As I slipped through the empty hallway toward my office door, I heard the sound of an animal howling from the receiving room nearby.

Receiving, by the way, is the room where people take their pets or strays when they come to the shelter. The animals are sometimes kept there a day until they are taken back to the kennels to be viewed by the public. People don’t like working in receiving, don’t like watching the animals stream in. Last Monday fifty-one animals were surrendered, most of them puppies. It was a real downer.

The dog’s eerie wail was cut short in mid-note as I entered the room. Now her eyes were on me, wondering about me just as I was about her. One of the strange things about working with kenneled animals is the sensation of being watched by multiple eyes each time you enter a new room. So many faces turn towards you, wondering what you’ll do next. Sometimes you just look away.

She was a medium-sized blonde, cowering as she pressed against the back of her cage. I walked over and surveyed her space, maybe three feet by four, just enough room to turn around. She had soiled the cage and gotten the runny poop on her coat. Her empty water and food bowls lay in the muck on the right side, with little dry space remaining. No one would be in to clean until the following morning.

I spoke. “Hey, sweetie. How ya doin?” She thumped her tail a bit and looked up through her eyelashes. I read her card. “Mandy is an affectionate and friendly one year old lab mix. She loves to play fetch and gets along well with children. She is housebroken and eats dry food.”

I thought of her youth with some family, running around with the kids and sleeping in the house and giving lots of wet kisses to everyone. Did her family imagine her caged and soiled, facing weeks of uncertainty with a possible death sentence at the end? Or did they picture her at a spacious country farmhouse where she played with the other carefree farm animals and slept by the woodstove in the warm darkened kitchen at night?

Animals live in an eternal present—they don’t seem to understand that if things are bad now, there is hope for a better future. Like young children, their feelings are intense, immediate, and heartfelt. I couldn’t explain to Mandy why she had been surrendered, or how we would try to help, or that she might have a wonderful new family soon. What could I do, now that the real damage had been done?

The first step was not to remain trapped in the moment, moved but unmoving. Speaking gently, I opened her cage and guided her by the collar into the clean one next door. I cleaned her bowl and gave her fresh water. Maybe it would make the night easier, hearing a few gentle words and having a clean place to sleep and some water to drink.

Sometimes I get letters from charities that I just can’t open. The weight of human and animal suffering can knock you flat and draw your tears. In the face of so much misery, what is a person to do?

What we often do is turn away. We must save ourselves first, and the sadness in the world is often just too much to bear. The thought of the suffering wounds us, and so we flee. Yet most of us feel that there's something terribly wrong about not doing anything when what we have is so much. When a child's life in a developing country can be saved with a one-dollar hydration treatment, can we sip our three-dollar cappuccinos each day in good conscience? And yet, why should we work and struggle and not get pleasure from life when we can? How can we enjoy our own lives while not dismissing the needs of the many facing genuine misery?

Answering these questions is the essence of becoming human. Finding a way to help others while preserving oneself requires practice and time. It can take a whole lifetime to get it right. I know I’ve been working on it for years.

My coworkers and I routinely hear, “I don’t know how you work in a shelter. I just couldn’t do it.” That’s because they don’t understand how positive the experience can be. Those who work in emotionally challenging places—helping abused children or animals, working with the neglected or elderly, assisting the homeless, teaching the uneducated—do so because they get satisfaction from it. They distinguish the possible from the impossible and measure success in baby steps. They continue because their actions make a bad situation more tolerable.

It is those outside the situation who are less fortunate. Visitors to an animal shelter, for example, have few options. They can adopt an animal or two (and probably feel bad about the ones left behind) or they can leave feeling helpless. It is the casual observers’ inability to change things that leaves them feeling powerless and despondent.

Those who work or volunteer at these places are not so impotent. There are an infinite variety of things that make me feel good about my day. I can feed biscuits or a leftover sandwich to a few dogs. I can speak kindly to them and make their tails wag. I can bring a scared pet into my office for a day or two to teach her that people can be kind; she’ll return to her cage eager to meet the next person and more likely to be noticed and adopted. I can talk with children when I visit their schools and listen to their stories, while encouraging them to treat animals with respect and kindness. I can offer a shoulder to someone who is mourning her ill or deceased pet and affirm the importance of her loss.

But the greatest feeling of all is when I find a caged animal a good home. One of my favorite adoptions was of a pup named Susie. Hit by a car and suffering from a limp, she was brought in as a ten-week-old stray. Within a month she had outgrown her cage in the puppy ward and was moved in with the adults. A gangly shepherd mix, her youthful enthusiasm overwhelmed visitors as she barked excitedly and pawed at them from her upper cage. She would fling water on them, too, and always looked disheveled. We despaired of anyone favorably noticing her, falling in love with her, rescuing her. As the months passed it was hard to say what seemed worse—killing her or having her caged during so much of her youth.

One day a gentleman of about fifty came in. He liked shepherds and he liked SPCA dogs, so I recommended he take a look at Susie. I took her into the petting room and gave them a few minutes to get acquainted. This was the time when she turned people off by jumping and pawing, leaving dirty traces on their clothes. When I returned a few minutes later, though, I was shocked to see her on the floor in a sphinx posture, body erect, gazing calmly up at him. Their eyes were locked, time stopped, as they sat adoring each other. She looked regal rather than manic, lithe rather than gangly. She had become beautiful, instantly transformed by him.
His wife appeared and we spoke of technical matters—Susie’s medical condition, their living arrangements, adoption fees. He refused to leave the dog alone for a moment, so his wife completed the paperwork. They called a few weeks later to say that the limp we thought permanent had healed, that the dog we thought irrepressible spent hours lying calmly in his car or at his feet.

There are many dogs I have come to love. I feel privileged to have seen their eyes and touched their fur and seen them love and begin to be loved. Watching them walk out the door lessens the pain of seeing others caged. And when I think of those that don’t make it, who die on the table because there aren’t enough homes, I have to remember the ones we do help.

The world is filled with stories, and sometimes it seems like there are more with sad endings than happy ones. Turning away does little to make us feel better and nothing to make the world better. But I’ve discovered that when I do something for others, whether it’s a gesture small or large, it’s like stepping through a door into a sun-filled room. Finding these doors and walking through them makes the inevitable sad stories easier to bear. It’s what helps us become human.