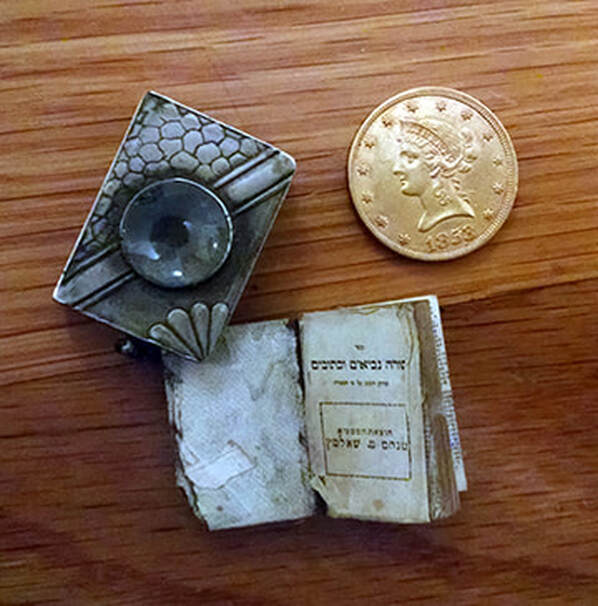 I’ve gotten used to sorting through my parents’ things. I must balance speed and respect, performing triage at a crash site. This patient lives—be careful. This patient goes to the morgue—over there.

So I pick up an item, take a second to decide its fate, and move on. I did the same with a four thousand square foot house of stuff when my mom went to assisted living. Speed was essential, and it still took a year. Now that my dad’s downsizing again, I’m back at it.

The movers said I should box up anything that would rattle, so I begin with the top dresser drawers. There are packages of stale crackers, scraps of notes, stained menus, expired appointment reminders. Dozens of business cards never eyed, sticky pennies, discarded name tags. All the things he couldn’t decide himself, each requiring quick judgment from me.

In their midst is a white cardboard box, the kind that holds dime store jewelry. I ignore the crayon scrawl on top, rushing to see if anything warrants saving. Three objects lay nestled inside. A petite gold ring with an oval stone, peach and salmon. A pristine gold coin secure in a clear sleeve, ten dollars, 1853.

And something else, half the size of my thumb, a rectangular silver box with an ornate design, hinges, and a gem embedded on its surface. What is this little thing? I lift the tarnished silver cover to reveal hundreds of pages filled with lined print too small to see. My modern eye judges it a two-point font. I see that the gem is, in fact, a magnifying glass. I take the book from its cradle and hold a page under the glass.

I’m surprised to see it’s Hebrew. There’s a story here, and I’ve just read the introduction.  Now I know who must have owned this--my grandmother. I look again at the childish scrawl on the box and recognize her hand. Though the second word is illegible, the first reads “bible” in the erratic lettering she used in her last years, as her fingers lost their nimbleness.

I want the rest of the story. Who would make such a gorgeous little thing, so amazing and so impractical? Was it designed this way so it could be hidden?  My grandma had emigrated from Hungary with her family. Had she brought it with her on the boat? Why did she save the coin? Was 1853 significant, or was the coin merely prized because it was gold?

And lastly, had she worn the ring? I reach down and take another look. It slides perfectly on my ring finger. It matches my skin tone and seems made for my hand. I wonder if she wore it as a girl, before her fingers became fat. I wonder why she put these things together in a cheap cardboard box, though clearly she considered them precious. And I wonder what other stories will remain untold, because they’re tales from those long gone.

My dad gives me these keepsakes from his dead wife’s dead mother, and in this moment everything seems alive. He seems pleased to pass them on to me. We part with the usual hugs and noisy chatter, the box tucked into my purse. In the stillness of the night, the items call to me as I drive them home. They speak of other lives, but I can only hear them whisper.

Nine years pass before I stumble across these words I wrote. I’m reminded I can no longer turn to my father to find out more.

I turn to Google instead, though I don’t expect it can tell me how my grandmother came to have these things. Soon, though, I’ve uncovered more than I could have hoped for.

I discover for sale a miniature book labeled a “Tanach,” or bible, that looks remarkably similar to my grandmother’s and which sold at auction for $2,200 dollars. This one from Poland, 1899, has a similar silver cover and magnifying glass. I dig further to find that Hungary, my grandma’s motherland, produced miniature books at the turn of the 20th century. Since she left there in 1921, she could have packed the small item and brought it with her.

Where had I put that book, which I carried home years ago with my father’s blessings? Surely I had placed it somewhere special. So I begin my search, first in one jewelry box, then another. I leave for last the small green music box of hers—the one she kept on top of her wardrobe, the one she wound for me, the one whose melody put me to sleep before the music had stopped. Surely I had put the bible in there.

But no luck. I had saved other things in that box, things from my past that were too meaningful to throw away, yet too irrelevant to wear. There is the Hadassah pin, a reminder of the lifetime membership that my mother and grandmother had bought me. I’d since gotten off the organization’s mailing list. There is the Jewish Star of David, a pretty gold thing that I wore so proudly as a teen and have no use for now. And there is my name written in gold on a chain, something my parents gave me when I was young. Too silly to wear as an adult, too personal to give away, but how can I throw it out?

In the midst of the clutter in my last drawer, I finally find what I’m looking for, the small cardboard box. I open it, and there’s the Tanach. The past comes flooding back, my father’s gift and my grandmother’s hands.

What should I do with it now? Track one down on the Internet, ask the auctioneer to tell me more? Will I be tempted to sell it, knowing that otherwise it will sit in a drawer, to be uncovered by someone in thirty years who finds it meaningless? I have no children to share the mystery with. Do I give it to nieces or nephews who never met my grandmother and have little interest in that past?

What does one do with things too valuable to give up but too impractical to do anything with? Modern life doesn’t seem cut out for such things. And Google has no answer for me.

I picture my grandma as a girl, holding her suitcase with all her possessions in one hand, clutching her mother’s hand in the other, as they make the long voyage across the ocean. Her clothing is neatly packed, along with some soap and a small towel. Tucked away in her mother’s bag are their links to what’s left, the things that remind her that she’s not just a penniless immigrant without a home: a small coral ring, a gold coin, and a miniature Hebrew bible made in her mother country. She looks back across the water, then turns and faces New York.

Another year passes. I’m prepared to end the story there, feeling the drama of the voyage and a bittersweet sense that there’s nothing more to discover.  But I realize there’s one person on earth still alive who might know more. My cousin Eva, who shared the same grandparents with my grandmother, lives in Canada and speaks Hungarian. She lived for a time in the same village and traveled a far different route to reach this continent, but maybe she can help.

So now I’m in her house near Toronto, the house she shared with her husband Zoli, married seventy years. I show her the bible, and she gazes at the print through a large magnifying glass. She’ll be ninety in November, but even good eyes can’t read this print.

Slowly she reads aloud and translates the Hebrew. Yes, it’s the Five Books of Moses. She reaches out to hold my hand, overcome.

“This is a precious book, a priceless book,” she says. “There’s only one way your grandmother could have gotten it—from our grandfather Adolf Weisz.” She explains the details, of who could afford to give such a book, who would value it, and who would do neither. Then we turn to look at a painting of him featured on the wall in her dining room.

This painting is the only possession Eva has from her childhood in Europe. Eva lost everything when she was taken as a teenager to Auschwitz. When she visited us years ago, my mother gave her the painting, which had made its way to the U.S. between the wars.

Now Eva reaches out to touch the Tanach, a book which her grandfather must have held in his hands before giving it to his daughter Gisella as a wedding gift in 1894.  And one generation later, Gisa must have packed the book in her luggage and traveled across the sea with her three children. Now Eva imagines the touch of his hand on this small thing.

In the 19th century, on another continent, before the pogroms and the Holocaust and the birth of the modern world and the invention of Google, my great, great grandfather gave this extravagant, impractical, sacred object to his daughter unaware that it would end up, improbably, in my 21st century hands. Hand to hand, from father to daughter, through the generations, unknowingly. I open the cover once more, and gaze at its inscrutable lines, knowing I can never part from them.