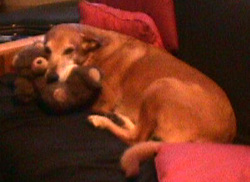 We buried Dory on a Wednesday. After the vet left our house, we covered her with a sheet and carried her. swaying, between two sticks. I imagine this was how people have done it through the ages, carrying their dead on a stretcher of sticks and cloth. We had already dug a hole on the hill before calling the vet, with Gene doing most of the work.

It was a hot July day, 90 degrees. A good day to get tired out from digging a hole three feet deep. Deep enough.

Tasha joined us halfway. We wanted her to see her sister being buried, to see that she had gone. The hill was hard with a seventy pound body, hard with the weight of the day. We had to set her down once for a breath. Ours, of course.

Then we arrived at the hole. It wasn’t hard getting her in. I lifted the sheet to tuck in her teddy bear near her head. She used to lay her head on the bear. She would need help now. Even in death she looked the same. She hadn’t yet stiffened or changed color as I’d seen people do. She simply looked asleep, as usual. Back went the sheet and she was snug again. Then came the dirt, one shovelful at a time. This was hard work in the heat. We took turns as Tasha groomed herself. She seemed curiously incurious. Then we trudged back to the house under the weight of the shovels and the day.

Back at the house, a storm was brewing. I went outside to hurriedly pick some basil for dinner and was buffeted by the wind. I was suddenly stricken by the thought of Dory  alone on the hill during the storm. With all that dirt on her, she’d be unable to come back inside. She was afraid of storms. Though my reasoning self knew that she couldn’t have those feelings, being dead and all, my primitive self felt otherwise. It seemed unbearable to leave her alone and unprotected like that. When I hurried back inside, I discovered Gene shaken from the same fear.

Somehow we got through until evening, when it was time for bed. We let Tasha out, and, unexpectedly, she stopped at the bottom of the porch and looked toward the hill. She was clearly waiting. Dory was still outside.

After we managed to get Tasha in, she wouldn’t come upstairs to sleep with us. She stayed in the living room, as is her habit when one of us is gone
from the house. She was waiting for her sister, and she waited all night. We didn’t understand how she could have seen Dory put to sleep, seen her buried,
and yet still not understand she was dead and gone. And yet for us it was the same. Reason had fled, and only unfettered emotion was left.