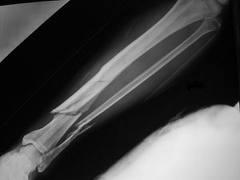 I read an article recently that made me cringe. It told of a girl, twelve years old, who had her legs broken repeatedly so she could grow five inches. She suffered from dwarfism and decided the pain was worth the benefit. Now she’s tall enough to reach a counter or ride a bike.

The bones were broken in the tibia and femur, then screws attached to the bones were turned to pull them slightly apart. Her body raced to repair the damage and went about stitching the gap together with scars. The bones lengthened from the stress, before they were broken, again and again.

I guess sometimes you need to feel pain to create something stronger, something better.

Not that we’re usually in a position to choose such a thing. Part of what’s remarkable about the girl’s story is that she made the decision to endure for the hope of a better life. Usually we’re just buffeted about by trials great and small. Sometimes it makes us stronger, and sometimes not.

When I was twenty five, I was recovering from my third knee surgery. I’d been careless with myself, riding a motorcycle without a working front brake, playing soccer repeatedly despite an injury, taking up karate in a big way. So my knee spoke to me in the only way it knew how, by deforming itself time after time in new ways to get my attention.

A year after the third surgery, I was attempting a light game of tennis with my husband Gene, and not doing a great job of it. He said to me, “You know, you’ve become a slow moving person.” It hurt like the dickens.  I prided myself on being fast. But then I realized it was true—I had become a slow moving person. I was young, yet I walked with a limp, and I tried to imagine my own decline over the decades. I had some work to do.

When you’re young, it’s easy to imagine that being old is something that simply happens to you. You really don’t have any effect on what that older person will be. When I asked my grandma about her dentures, she said “Oh, it’s because I’m old.” So I thought that there was some magical, inevitable transformation that took place late in life, and it was probably related to getting grey hair. I didn’t understand that you might avoid the fate of dentures through good tooth brushing.

In my twenties, I was old enough to have some scars, but too young to see their potential benefit. But Gene helped. When I was ready, I asked him what I could do about my slow moving self. “Act the way you want to be, and you’ll eventually become that thing,” he said. It’s a lesson I’ve applied to all sorts of things when I’ve had the will, and it works.

So I set myself the goal of becoming faster. I determined to continue my stretching, my weight lifting, and to simply walking faster. Athletes are quite familiar with the idea—to make stronger muscles, you lift more weight; to get faster, you practice interval training. I determined that I would keep exercising, but with the goal of being able to walk when I was eighty. That meant giving up on twisting sports, but sticking with regular and challenging exercise.

My limp disappeared, my scars faded, and I got faster. I came to appreciate the comment that Gene had made—because in order to become a better person, I first had to recognize a problem and then try to solve it.

Of course my experience was nothing compared to what that twelve year old girl went through, but it did show me how to face a challenge I first thought intractable.

How many of us would accept being a dwarf rather than explore options and face having our legs repeatedly broken? How many of us look at inevitable setbacks and decide, simply, to accept them? Either the pain of overcoming these setbacks seems too daunting, or else we lack the ability to even imagine an alternative.

But for those who can imagine that alternative, and then endure, their future selves will be the victors. Maybe that young girl knew something about courage that we could all take heart in. Not only is she standing tall now, but she’s prepared for anything that life can send her way.
​
Next