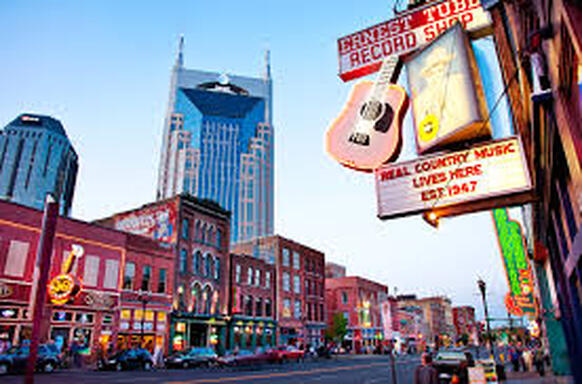 “I know who I fucked to get into this business,” she said, “But I don’t know who I have to fuck to get out of it.” We all laughed. This was Nashville, after all, and everybody ends up feeling screwed one way or another. There are so many people pursuing their dreams, and so few slots that need filling. If you want to see the intersection of ruthless capitalism and luck, Nashville is a good place to witness that train wreck.

Our main business for three days was to attend the Nashville Songwriter’s Festival. We were scheduled to play three short sets of three songs each. We’d been practicing our nine songs, planning out what to say and when to play which song. We’d been playing gigs together for seven years, but this was special. This was Nashville.

I had no idea who might be listening. I looked at the photos from past festivals and counted the people in the audience. I planned for us to get four or five folks while hoping for more. I tried on outfits, picked out jewelry, and applied bronzer to my legs. I made rough cuts of our latest CD, just in case. What was I imagining? That maybe some agent hidden in the audience would be impressed and we’d need something to give him.

Two days driving, and finally we were there. It was five pm, 100 degrees, and we managed to find shade so the instruments wouldn’t fry in the car. Step one was to see if there was some place to store them when we weren’t performing.

Two women were manning the outdoor registration table. They looked worn, like hookers gone straight after a couple decades of hard use. The first one, with faded red hair like winter grass, spoke like someone drunk, though I think she was straight. She couldn’t answer our questions, making me wonder why she was at a table marked “information.” I found out later that many of the volunteers lived on the streets. One of them sold us the local homeless paper for a dollar. The lead article mentioned him, a songwriter who’d been drawn to Nashville to make a name for himself. He was still writing music from his tent, still hoping.

On the first day, we performed on a large outdoor stage set up under a big tent. We listened to those before us. Almost everyone played with a simple guitar accompaniment. I was the only bass player at the festival, and no wonder. There was no easy way to lug that thing around and no place to store it.
The first songwriter spoke too loudly into the mic about her sweaty armpits and the heat. I checked off the mental list: be careful with onstage banter.

Finally it was our turn. There was an orange warning tape across the front of the stage, for what I’m not sure, but it made a jaunty appearance between us and the crowd.

The person doing sound didn’t seem to know her way around the board, for she couldn’t fix the feedback problems that interrupted people’s conversations as we sang. We might get through a phrase or verse, but then hssss, there was the cross between a screech and a squawk that seemed better suited to an eagle after its prey. All that fuss over the subtleties of the instrumental breaks, over making sure our harmonies were matched perfectly, over getting new strings on the guitar so that it would produce peak sound for the performance—all that was gone thanks to our sound man.

We tried to stay upbeat and keep our wits about us, joking a bit with the crowd and pointedly ignoring the dampness on our faces and instruments, the way pros are supposed to do. A few people were even listening, though most appeared engaged in what looked like self-promotion. And so ended our first performance in the big city.

We were determined to do better the next day, so I did some advance scouting to see the location and to chat with the sound man. You could smell the desperation of the musicians, who were trying so hard to do their best during their big debut, hoping someone in the crowd would listen, would appreciate their original songs, and would offer them something—a contract, a promise, an intro to a conversation, anything to start a music career and realize the dream.

The girls had given a lot of thought to their costumes, hair, and presentation of body parts. Clearly they were trying to work more than their vocal chords. They seemed especially easy prey for guys who must feel their yearning, their hope, their fear–guys who, with little effort, could find a way to offer these girls something vague, something potentially ego-boosting, in exchange for something far more immediate and physical. All I know is, there were more faux leopard prints and pointy leather boots than seemed natural.

Our set went well, though. People were actually listening, a couple of them wanted CDs, and we generally felt like pros on stage. There’s some chemical difference between getting up there, feeling like you’re winging it, and performing like it’s part of you. The audience feels it too. We’d crossed that line, and it made the sounds deeper and the stage patter more comfortable.

Our last set was scheduled for Sunday night at 9:00, the final night of the festival, and we prepared ourselves for the worst. Surely no one would be there. We entered the lounge of the hotel slated for the performance, and the smell of decay struck full force. I wondered how a hotel lounge could smell moldy and stale. Who stayed there?

I listened to two other musicians as they chatted about a different songwriter’s festival in Nashville a month earlier, one where famous (paid) singer-songwriters performed. Okay, another reminder that we weren’t invited to that festival to play. Instead of being compensated, we were being pressured to pay for agents, or recordings, or whatever else someone could squeeze out of us. As people desperately tried climbing the ladder, the glimmering top rung seemed farther and farther away.

We were also warned that instead of agents lurking in the audience searching for talent, some people came to find song lyrics to steal.
I was having trouble finding the pleasure in the moment.

But then we got onstage, and everyone was listening. One person wanted to buy a CD, another wanted to give our contact info to Alison Krauss, a Nashville bluegrass favorite. He said he was a recording engineer and a co-organizer of the festival, which I could only hope was true. And so we gave him the rough mix of our second CD, did a little schmoozing, and left with a bigger spring in our step.

It’s been a month, and no word from Alison. But we had a good ride home listening to music in the car. And what a pleasure it was, watching the neon lights of Nashville fade from view behind us.