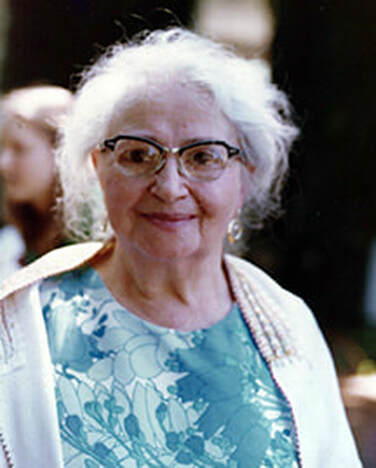 I fell in love with numbers at my grandma’s kitchen table. The room was just eight feet square, so after they filled it with cabinets, appliances, and my grandma’s robust form, there was just enough room left for a small metal table, a fold-out stool with a red vinyl seat, and me. So I sat on the stool, my left elbow on the table, and watched my grandma cook.

She would stir and chop while asking me “what’s 2 plus 6?” and “what’s 7 minus 4?” I was only four then, so these questions were hard and exciting. My head filled with the lightness of the numbers as my nostrils filled with the smell of stuffed cabbage or chicken paprikash. I didn’t know then that my grandma hadn’t much schooling, though I figured it out later when I noticed all her spelling mistakes. I still don’t know if the First World War interrupted her education in Hungary, or if she simply wasn’t as good with English. All I know is that she was the only grownup who was willing, for hours, to do my pluses and minuses with me.

I loved to count everything I spied. While I sat on her toilet seat, I’d count the yellow tiles on the floor and the number of rows in the heating grate. I counted her dresser drawers as I lay in bed on the left side of her room, while she lay in the one on the right and snored, having fallen asleep mid-story. I counted the slices of pear that she arranged on a plate for my snack, after peeling and cutting out the wormy parts. I counted the strips of toast that she sliced for me to dip into my soft boiled egg, which sat in its very own white porcelain cup. Five was best. If there were more, I’d run out of egg and have to eat the toast dry. If there were fewer, then they’d be too fat and wouldn’t fit. That was the most fun kind of breakfast I ever ate. At home I had cereal.

I counted the slugs we killed when we went on a hunt in the back yard near dusk. We killed them so they wouldn’t eat the roses. We’d go out with that special tool of hers, the one with the long wooden handle and forked metal tip, and look for the gooey devils under the bushes. Then I’d take the handle in two hands and thrust down hard, cutting the poor thing in half.

On a good night, we’d get into the double digits, which meant I got to count higher. But I didn’t like the mess that all those dead slugs made and I didn’t feel quite right about killing them. It didn’t seem to bother Grandma, though.

I even got to count when we talked to people. She had a special phone that was much more interesting than the kind you punch. For starters, it was shiny black, with the numbers in a big circle and holes for your fingers. You’d touch the number you wanted with your fingertip, then turn the dial clockwise. The higher the number, the longer the sound.

She’d say the numbers out loud as she placed her finger in each hole--“nine, von, tree…”  As long as she was calling someone in town, she dialed only five times. When she called Mom and Dad, she’d dial seven. And if she were making an expensive long distance call, she had to dial eleven. Of course I wasn’t allowed to talk much on those calls, but I’d get a precious minute or two with Odon Bachi or Olga Nani.

At night I’d count the teeth in the pink horseshoe gums that she left in the glass by the bed. Grandma always looked funny when she took them out, like she’d become a different person altogether. I asked how she was able to take her teeth out all at once like that, when I couldn’t take out mine.

That seemed like a pretty good explanation, because old people are different in so many ways. They have all sorts of magical powers.

When I was six, she figured I was ready to learn about money. She took me to her bank and opened an account for me, my very own, and I got my very own savings book too, with my name typed in it. My grandma said that whatever I put in the bank, she would add the same amount. So if I deposited one dollar, she would add one dollar. I had already learned about doubling, so I knew this was a good deal. 1 + 1 = 2 might not sound like much, but 512 + 512 = 1,024 sure did.

I loved going to the bank with Grandma. I got to reach up and give my money to the woman at the counter, along with my book, which had sixteen pages not counting the cover. She’d enter all the information, like the amount and the date and the total, so I could watch it all accumulate on the pages. After that I would walk over to the right side, where there was a set of stairs with two steps to reach the lollipop tree. I could take whatever color I wanted.

When I was nine, we moved farther away and could visit only every few months. That was when I counted the days until she would put her arms around me again.

When I was fourteen and old enough to make the two-hour bus ride, I’d use my own money for the ticket. I was still counting, but this time it was the jars of grape jelly, raspberry juice, or stewed apples that we canned. Afterward she had eight needles for me to thread, four with black and four with white, since she could no longer get the thread through the narrow opening herself. Those needles would be enough until my next visit, when I would thread eight more and trim all ten of her toenails, which she could no longer reach.

When I was almost twenty one, I counted her heartbeats. It was then that I learned that hers were finite.