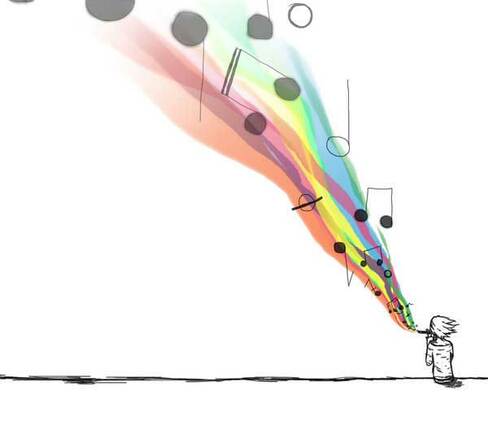 Music Deepens Emotions
​
...as I’ve learned how to play more musically and mesh with others, I’ve found a deep satisfaction. Maybe what I’m experiencing is flow.

Psychologists talk of flow as complete absorption in an activity—your energy is focused and you’re completely immersed. Flow brings not only long-term satisfaction, but also improved health. One study of classical pianists considered how flow affected their bodies: as the musicians entered a flow state, their heart rates and blood pressure decreased and facial muscles relaxed.[i] When you’re in flow with your group, you’re concentrated on the task, you have a sense of control, you lose self-consciousness, and your sense of time is transformed.[ii] Musicians also call it “being in the groove.” Flow feels transformative, and people get hooked on it.

That may be the dopamine that’s kicking in. According to neuroscientists, “music that people described as highly emotional engages the reward system deep in their brains.”[iii] What’s more, music bumps up our dopamine levels not only during peak musical moments, but even when we merely anticipate those moments or imagine a tune. When we’re moved by a piece of music, they conclude, “there’s little that we value more.” It’s no wonder that people call music addictive.