Girls in Their Summer Dresses
Essay 2, Finite
By gayla mills 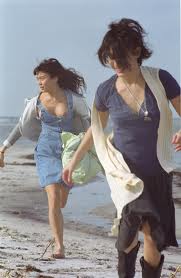 When I was twenty, many seasons ago, I would turn my face toward the approaching  summer, throwing off my winter gloom and baggy clothes without restraint. But now it’s a bittersweet time. It’s when the dresses appear, the ones with the spaghetti straps that trail down either side of the breasts, where perky firm flesh does more than just hint above the wafer-thin cloth. The skin varies from cream to mocha to ebony, but it all looks soft and unspent. It glistens. The girl can wear the silliest of things on her feet, whether they are cowboy boots, flip flops, or cheap sandals with costume jewelry accents from Payless. It doesn’t matter, for she looks ready to throw them off and dance. She isn’t hardened yet, hasn’t faced failure. And so she is charming too, light and carefree, no sharp edges.

It’s such a brief time, really, when people are fetching without trying, when plump looks squeezable, when unwrinkled faces show half-formed desires, thoughts, defenses. It’s that moment when the young are searching and restless, trying each other on like costumes, using and being used, testing and being tested, scrambling. It’s a churning sea of desire and fear, with electric moments and stormy shocks. Then the waves still, people pair off or don’t, and the summer dresses are moved to the back of the closet. One day they’ll be given away, for they no longer fit the moment.