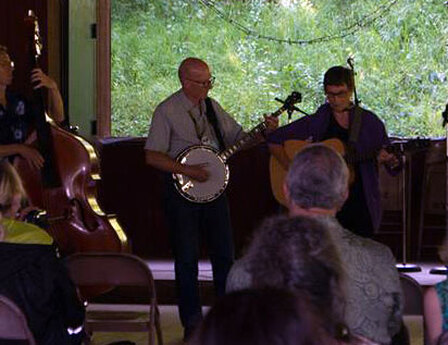 To celebrate their 35th anniversary, Mike and Plum Cluverius decided to try something new—attend a music camp together. It was such a success, they’ve celebrated every anniversary since at Augusta Heritage Center.

Mike returned to the banjo in his forties after a gap when he rarely played. He had faced the usual impediments, including their young children. “When I would get the banjo out with two inquisitive, active boys, I would think: Oh my gosh, how can I get this back in the case before they’ve unscrewed all the parts,” he laughs.

Plum had picked up a few guitar chords in her teens, but didn’t start playing seriously until her fifties. “I can be a poster child for it’s never too late,” she says. A leadership coach and consultant who’s at ease speaking to a full auditorium, Plum was initially so shy that she wouldn’t play in front of Mike.

But after years of lessons, jamming, and performing, she and Mike most enjoy playing with each other now. “We play music together at night,” she says. “We don’t watch much TV.” Plum is good humored about how far she has come: “Thank you, Mike, for being patient with me and for playing music even when I totally sucked,” she says, laughing.

Music camps have increased their enjoyment and musical satisfaction.  Mike appreciates “the opportunities to play with so many other people, to learn from them and to share with them. It’s just the camaraderie of it.”

Plum agrees. “It turned out to be this awesome experience,” she says. “You’re in a small class, so you get to know the people really well. It’s interactive, and everyone is playing. It’s that supportiveness that we’re all in it together.” Since bluegrass has traditionally leaned male, Plum felt that the women needed extra support, so she organized an all-women’s jam at camp. Dozens showed up.

As Mike and Plum improved, they began making music in other settings too. One of their most meaningful experiences was playing to patients on the memory unit where Mike’s mother stayed. People in all stages of dementia brightened up when they heard familiar songs. The music became a way to offer something of themselves and to connect to his mother and the other residents. Plum has also been volunteering for the Guitars for Vets program to help soldiers suffering from PTSD. “I do a lot of listening as well as teaching guitar,” she says.

So music, which has given the couple so much, is now helping them give to others.